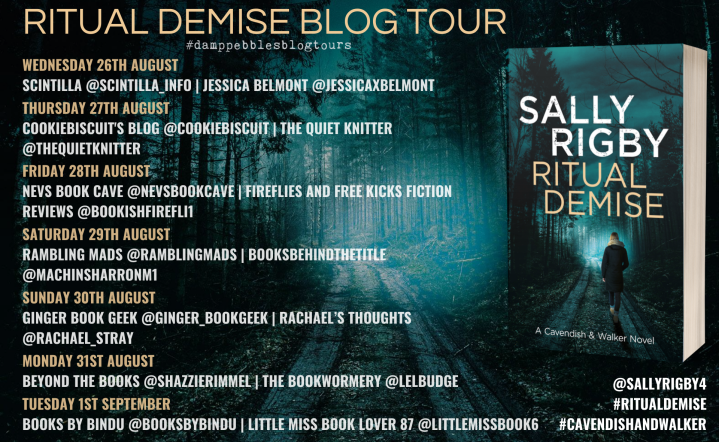 Someone is watching…. No one is safe

The once tranquil woods in a picturesque part of Lenchester have become the bloody stage to a series of ritualistic murders. With no suspects, Detective Chief Inspector Whitney Walker is once again forced to call on the services of forensic psychologist Dr Georgina Cavendish.

But this murderer isn’t like any they’ve faced before. The murders are highly elaborate, but different in their own way, and with the clock ticking, they need to get inside the killer’s head before it’s too late.

Ritual Demise is my first read from Sally Rigby. I want to read more from this series, but I was able to read this as a standalone and enjoy it very much! This could be a cool television series! I don’t say that often, but I could absolutely picture that.

This is a very intriguing police procedural. I think the author chose to take some interesting turns that many others have not, which makes this refreshing.

I enjoy the characters. The relationship between Walker and Cavendish is very entertaining. I love their banter.

This is a great read and I recommend giving it a shot.

*I received a free copy of this book from Damppebbles Blog Tours in exchange for an honest review on the blog tour. All opinions are my own and unbiased.*

Sally Rigby was born in Northampton, in the UK. She has always had the travel bug, and after living in both Manchester and London, eventually moved overseas. From 2001 she has lived with her family in New Zealand (apart from five years in Australia), which she considers to be the most beautiful place in the world. After writing young adult fiction for many years, under a pen name, Sally decided to move into crime fiction. Her Cavendish & Walker series brings together two headstrong, and very different, women – DCI Whitney Walker, and forensic psychologist Dr Georgina Cavendish. Sally has a background in education, and has always loved crime fiction books, films and TV programmes. She has a particular fascination with the psychology of serial killers.

Check out her website for a FREE prequel story….. www.sallyrigby.com