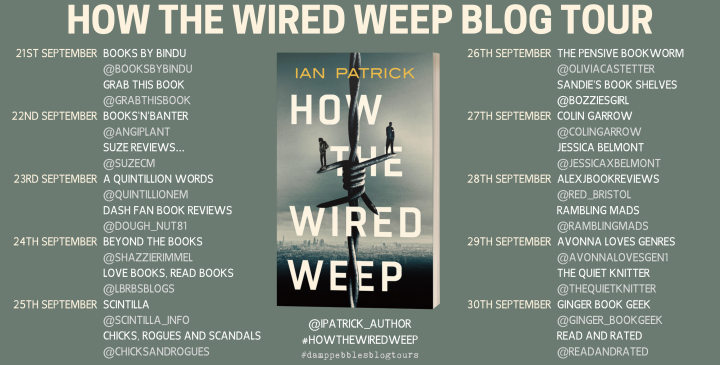 The Wire crosses the pond.

Ed is a detective who handles informants. He recruits Ben, a young man, who is treading a dangerous path into the criminal underworld.

Ben’s unsure of where his loyalties lie. They have to find a way to work together despite their differences.

Both men are drawn into the world of Troy, a ruthless and brutal leader of an Organised Criminal Network.

Ben is torn between two worlds as he tries to walk the impossible line between criminality and helping Ed combat crime.

He lives in fear of discovery.

When your life is thrown upside down who do you turn to in order to survive?

Set against the backdrop of the 2012 Olympic Games, How the Wired Weep is a fast paced urban thriller where time is against both men as they attempt to serve their own agendas.

You know when you pick a book up and start reading before bed, and suddenly it’s 2a.m. and you’re on the last page? That is what happened with How The Wired Sleep. I was captivated and could not set it down.

Author Ian Patrick is new to me, but it is clear he is a seasoned writer. I am thoroughly impressed with his ability to take his years of experience as a Detective Sargent and transform that into such a realistic novel. This felt as though I was reading a true story.

Fast paced, suspenseful, and will keep you up all night if you start reading it too late. Highly recommended and worth the lack of sleep!

*I received a free copy of this book from Damppebbles Blog Tours in exchange for an honest review on the blog tour. All opinions are my own and unbiased.*

Ian spent twenty-seven years in the Metropolitan police the majority as a Detective Sergeant within the Specialist Operations Command. He specialised in Child Protection and was part of a Major Investigation Team that targeted abusers and investigated the murder of children.

His last seven years were spent in the Covert Policing Command where he managed a specialist covert unit dedicated to the detection and disruption of organised criminal networks across London and the UK.

How the Wired Weep is a standalone novel.

Rubicon is in development with the BBC for a six part TV series.

He’s appeared at Bloody Scotland in 2018 as a spotlight author on the opening night with Val McDermid and Denise Mina.

Ian’s undertaken a mentorship with Write4Film Scotland and is developing a script for a short film. He’s also an ambassador for Muscular Dystrophy Scotland. He lives in Scotland where he divides his time between family, writing, reading and photography.