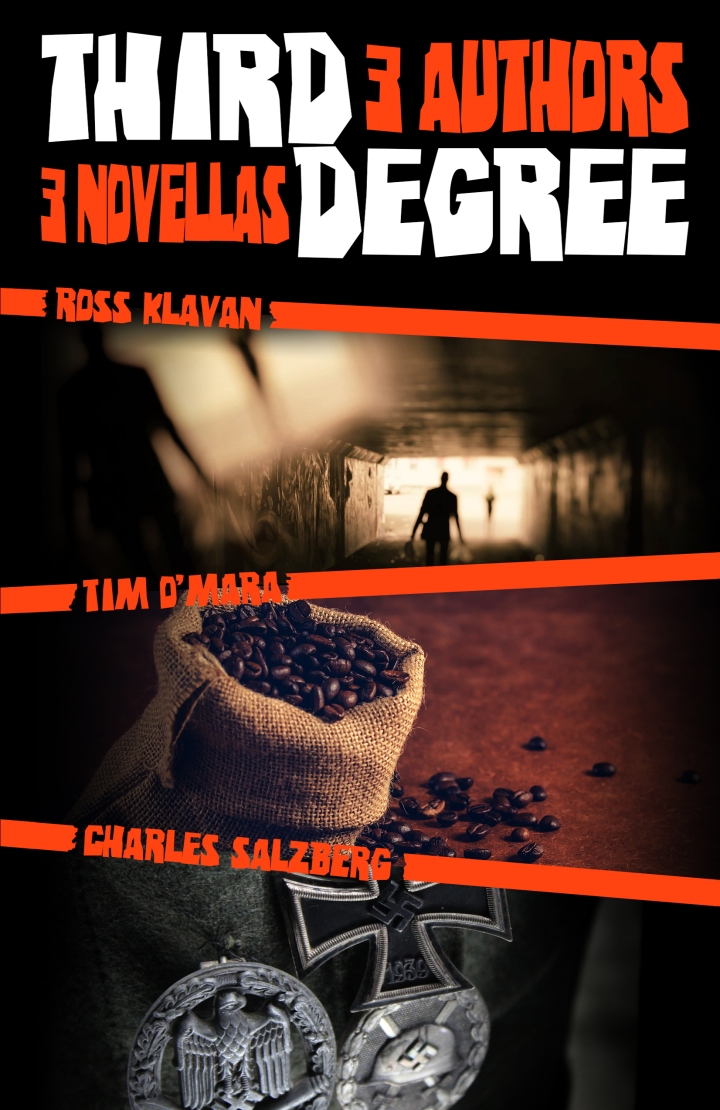 Cut Loose All Those Who Drag You Down

A crooked reporter who fronts for the mob and who’s been married eight times gets a visit from his oldest friend, a disgraced and defrocked shrink. The man is in deep trouble and it’s clear somebody is going to pay with his life.

After smuggling cigarettes, maple syrup, and coffee, Aggie discovers a much more sinister plot to exploit what some consider a precious commodity: the trafficking of under-aged children for the purposes of sex.

Months after America’s entry into World War II, a young reporter uncovers that the recently disbanded German-American Bund might still be active and is planning a number of dangerous actions on American soil.

Third Degree contains three short stories. I feel like each story had a purpose and was really well written. In my opinion, short stories are amazing when they are written

The Fifth Column is about Jake, a reporter who wants to report during WWII. This is action driven and character driven. I think this was excellently written.

Beaned was an intriguing look into criminal life. Again, the characters are really well developed. Always impressive in such short page time.

Cut Loose Those Who Drag You Down may have been my favorite. I just really enjoyed the friendship between the characters.

*I received a free copy of this book from Partners in Crime Tours in exchange for an honest review on the blog tour. All opinions are my own and unbiased.*

Ross Klavan has published two other noir novellas with Down and Out: “I Take Care Of Myself In Dreamland” and “Thumpgun Hitched” both in collections with Charles Salzberg and Tim O’Mara. His darkly comic novel “Schmuck” was published by Greenpoint Press in 2014. Klavan’s screenplay for the film Tigerland was nominated for an Independent Spirit Award and was directed by Joel Schumacher, starring Colin Farrell. He’s written screenplays for InterMedia, Walden Media, Miramax, Paramount, A&E and TNT. As a performer, Klavan’s voice has been heard in dozens of feature films including “Revolutionary Road,” “Sometimes in April,” “Casino,” “In and Out,” and “You Can Count On Me” as well as in numerous TV and radio commercials. In other lives, he was a reporter and anchorman for WINS Radio, RKO Network and LBC (London, England) and a member of the NYC alternative art group Four Walls. He lives in New York City.

Charles Salzberg, a former magazine journalist and nonfiction book writer, has been nominated for two Shamus Awards, for Swann’s Last Song and Second Story Man. He is the author of 5 Henry Swann novels, Devil in the Hole, called one of the best crime novels of 2013 by Suspense magazine, Second Story Man, winner of the Beverly Hills Book Award, and his novellas Twist of Fate and The Maybrick Affair, appeared in Triple Shot and Three Strikes. His short stories have appeared in Long Island Noir (Akashic), Mystery Tribune and the crime anthology Down to the River (edited by Tim O’Mara). He is a Founding Member of New York Writers Workshop and is on the board of MWA-NY, and PrisonWrites.

Tim O’Mara is the Barry-nominated (he didn’t win) author of the Raymond Donne mystery novels. He’s also the editor of the short crime story anthology Down to the River, published by Down & Out Books. Along with Smoked and Jammed, Beaned completes the Aggie Trilogy.

This is a rafflecopter giveaway hosted by Partners in Crime Virtual Book Tours for Ross Klavan, Tim O’Mara, and Charles Salzberg. There will be 2 winners of one (1) Amazon.com Gift Card each. The giveaway begins on October 1, 2020 and runs through December 2, 2020. Void where prohibited.