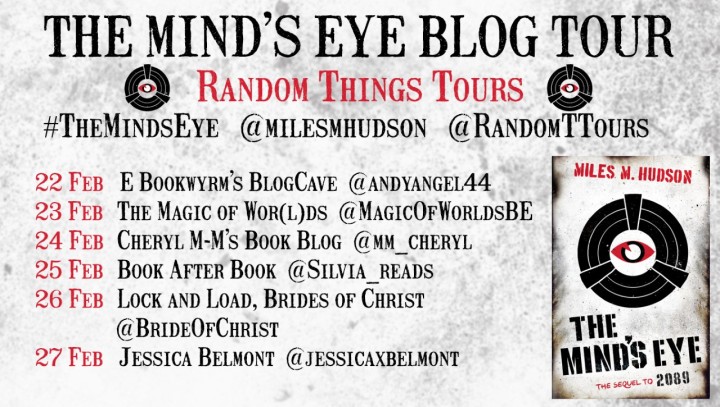 Everything anyone sees and hears is recorded and available to view online. Our eyes and ears are remotely wiretapped. There can be no secrets. But… what if the surveillance system had been hacked, and you weren’t actually committing the crimes people saw you committing? Jack Smith and Vicky Truva are on the run, again.

In 2089, Jack was banished to an island in the Bristol Channel for blowing up the old GCHQ building to destroy the surveillance computers. 18 months later, those responsible for his conviction suffer arson, assault and explosion. Eye witnesses attribute these crimes to Jack. The surveillance system is fixed, but he appears to be evading it. That should be impossible.

With his friend, Vicky, Jack returns from exile to try to prove that he is not the criminal. A militia posse, including Vicky’s brother, pursue them across climate-changed Gloucestershire. The surveillance system functions erratically. Can Jack and Vicky outrun the posse long enough to work out what’s wrong with it? And find out who really committed the crimes? And can they catch them?

The Mind’s Eye is the sequel to 2089, but can be read as a standalone story.

The Mind’s Eye by Miles M. Hudson is one of those books that you sit down, start reading, and think, “this could easily happen.” In this setting, everything a person sees, says, and does is recorded and available for all to see. As if that isn’t creepy enough, then that tech is hacked, and suddenly, it is possible to be accused for a crime you may or may not have committed. Yikes, right?

This concept is so intriguing to me because it is so plausible. Climate change has altered the landscape, and of course, this dystopoian concept of technology is crazy. I think the plausibility of this novel, makes the tension even greater. I flew through this book because it was so intriguing and I just wanted to know what happened.

I’m really impressed. I was drawn in and I was unable to set this down. I highly recommend giving this one a shot.

*I received a free copy of this book from Random Things Tours to review honestly on the blog tour. All opinions are my own and unbiased.*

My novel, 2089, is a vaguely Orwellian-themed surveillance society tale.

Jack Smith objects to a life with no possibility for secrets. He blows up the audiopt surveillance computers at GCHQ, and goes on the run across post-apocalyptic Gloucestershire. But will his contemporaries, including best friend Vicky Truva, agree with his revolutionary ideas?

The sequel, The Mind’s Eye, is a faster-paced sci-fi thriller. This time, Jack Smith is accused of crimes he didn’t commit, despite having been in exile when the crimes occurred. But the audiopt surveillance footage is damning – it clearly shows Jack committing the crimes. He and Vicky are on the run, again, in a tense chase to find the real criminal.

Go to mileshudson.com for loads more info including videos!