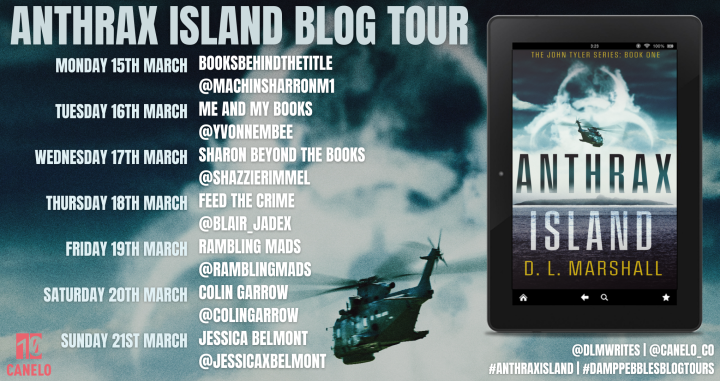 FACT: In 1942, in growing desperation at the progress of the war and fearing invasion by the Nazis, the UK government approved biological weapons tests on British soil. Their aim: to perfect an anthrax weapon destined for Germany. They succeeded.

FACT: Though the attack was never launched, the testing ground, Gruinard Island, was left lethally contaminated. It became known as Anthrax Island.

Now government scientists have returned to the island. They become stranded by an equipment failure and so John Tyler is flown in to fix the problem. He quickly discovers there’s more than research going on. When one of the scientists is found impossibly murdered inside a sealed room, Tyler realises he’s trapped with a killer…

A gripping thriller that will leave you guessing until the final page. Perfect for fans of Terry Hayes, James Swallow and Alistair MacLean.

Anthrax Island by D.L. Marshall is a fantastic novel. I picked it based on the cover and the title, and honestly, tried to go in blind. It was an experience to read this one. Intense, atmospheric, high stakes thriller and murder mystery.

I think this plot is so original. I couldn’t put it down. I made the mistake of starting before bed and finished it late into the night. The adjectives I want to use to describe this book just don’t feel good enough: gripping, compelling. So good.

Plot, characters, writing…Anthrax Island has it all. I don’t want to make this review roo long because you should go into this one without too many preconceived notions. Highly highly recommended! Give it a read!

*I received a free copy of this book from Damppebbles Blog Tours to review honestly on the blog tour. All opinions are my own and unbiased.*

D. L. Marshall was born and raised in Halifax, West Yorkshire. Influenced by the dark industrial architecture, steep wooded valleys, and bleak Pennine moors, he writes thrillers tinged with horror, exploring the impact of geography and isolation. In 2016 he pitched at Bloody Scotland. In 2018 he won a Northern Writers’ Award for his thriller novel Anthrax Island.

You can support me by buying me a book