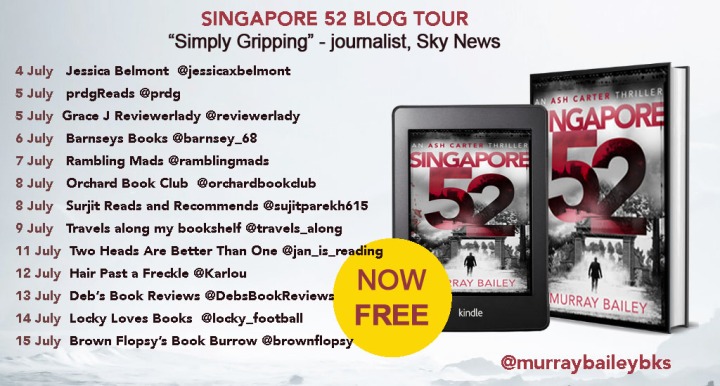 Welcome to my stop on the blog tour for Singapore 52 by Murray Bailey. Thanks to the author for inviting me!

Ash Carter had to leave the Middle East in a hurry. But when he arrives in Singapore he finds himself in the middle of a much bigger problem.

No one knows where, or when, or who but someone is planning an attack. Carter is told to make sure it doesn’t happen. With pressure from politicians and the army and with Chinese Secret Societies watching his every move, he has other plans. He is more interested in finding out who killed his friend.

Singapore 52 is the first book in the Ash Carter Thriller series and is an excellent read. I think the strongest part of this story is the characters, particularly Ash. I love really well-done character building and this is done well in Singapore 52.

This is action-packed and quite a thrill ride. It is the type of book I love to read because it is almost impossible to put down once you start. Unfortunately for me, that means a lack of sleep!

The plot is so well-written, it takes you on a journey and sometimes I forgot I was reading. I am.thoroughly impressed with this author’s writing.

Overall, Singapore 52 was a great read that I definitely recommend checking out.

Murray Bailey got his first taste of success when he was published in the Times at 18 and in his local newspaper. Although he went on to pursue a different career, he continued to write and edit and became the editor of an international magazine and editor of 4 technical books. His first work of fiction, I Dare You, was published in 2016 and The Lost Pharaoh continues the ancient Egyptian story glimpsed in Map of the Dead and is his ninth title. Murray was born in Greater Manchester, England and has being moving south ever since. He now lives on the beautiful Dorset coast with his wife and family.